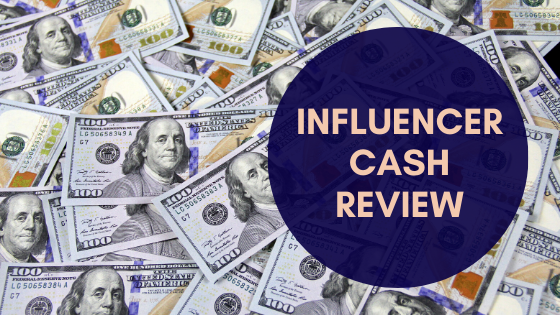 This is an InfluencerCash Review. If you are reading this, you’re probably here for three reasons:

If you go to the website, they say that you’re gonna start making $200 a day.

If we take a look at some of the testimonials here, there’s actually only one person here. But she is on other websites just like this, the same person.

Then these payment proofs on the website are just screenshots. So, this isn’t something where you can actually see someone go refresh the screen and show that they actually have made these payments or gotten these payments. So that’s one thing that sticks out to me at the very beginning.

If you go to the frequently asked questions, they say they’ve been around since 2012. I don’t think so.

How does it work?

They say that they get paid through ad revenue and sponsorship products used to pay their members. By inviting friends, you’re building traffic to their site, increasing their ad revenue. I don’t really understand how they make ad revenue because I don’t see any Google AdSense ad on the site. That’s something else that sticks out to me.

How do you earn?

Earning on it is simple you can earn by inviting friends, and then testing out some of the sponsors’ products. In order to get paid, you just request your payment in the member’s area and then you can get paid through PayPal, Cash App, Bitcoin or mail checks. And that’s pretty much the frequently asked question session.

I went ahead and created an account without my real name and a fake email address to get in and show you guys what is in here.

When you click on refer and earn, it’ll show you that for each person that you refer, you’ll get $10. Every time someone clicks on your link, you’ll get paid $2.

Then you get paid $25 just for signing up. So logically, where does that money come from? And how can they afford to pay $25? They say you’re bringing them ad revenue. But again, there’s no Google AdSense on this site at all. Obviously, you can earn money from Google AdSense by people clicking on ads on your website, but there are no ads on this website.

If you click on this video tutorial, there’s some guy showing you his Phone and showing you how he made $30 for completing this survey, he earned $20 for doing something else… He showed how it was instantly deposited into his accounts. He goes in and shows you how easy it is, you just lay in your bed and make tons of money. And he shows how he has $26,000 in his account already. That to me just doesn’t make any sense. I mean, the numbers just don’t add up.

If they are paying you $30 for a survey, they have to be getting more than $30 per survey from the company the surveys are from. Which is pretty stupid I would say. Paying $30 per survey.

These are just CPA offers. Generally, you get paid just a few dollars for such jobs. So that does not add up at all.

Then you can do promotional posts. They show you how to try to coax your friends into signing up. These are actually pretty decent looking banners that you could put on your Facebook wall.

This is one thing that doesn’t make any sense to me either, that you can create a YouTube video and they will pay $50.

Where is the $50 coming from for them to pay you to create a YouTube video?

They’ll probably say that it’s coming because you’re bringing more traffic to the website. So they’re getting more ad revenue, but there are no ads on the site.

They show you how to post on Instagram, Facebook, and Twitter as well. Also, it says you’re going to get rewards besides the cash. You can get some gift cards and different things besides the money, supposedly.

The payments are via PayPal and Bitcoin. You can even get a check sent to you. But I have yet to see anyone get paid. This gentleman in this video, it shows his PayPal account but it doesn’t show his name there. No name but a bunch of payments to Paypal. To me that’s just a fake screenshot of his PayPal account.

So I don’t think anyone’s getting paid from this. Because this is exactly like other sites that I have reviewed. So stay away from these other ones as well as KashTree, RainMoney, and NiceCash.

All those are exactly the same when you get in there. Everything’s completely the same, except it has a different name to it. So I would stay completely away from all of these because I think what happens is they take your information, and they sell your name and your email to another company.

People who have fallen prey to such websites say they can never get in touch with the support. This means they are scam and would never respond to any of your queries.

Don’t waste your time or your money with such systems.

If you go to TrustPilot and look at some of these reviews, you will get a better picture of why InfluencerCash is a scam.

I hope this InfluencerCash review was helpful for you. Don’t get fooled by the professional website and video testimonial they show you. It’s not enough evidence to prove their validity.

If you are looking for a way to make money online. Then you should check out our free online entrepreneur community. We have a step by step course to help you achieve your dreams of making money online.

Click Here For Free Training On How To Make Money Online